This is my stop during the book blitz for Fire Dancer by Elizabeth Howell. This book blitz is organized by Lola’s Blog Tours. The book blitz runs from 9 till 15 November. See the tour schedule here. 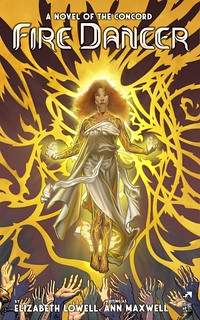 Blurb:
Rheba and Kirtin are the last survivors of their homeworld, at the edges of the Concord, forgotten but rich in history and traditions. Rheba is a fire dancer, able to focus and manipulate vast amounts of energy through discipline and motion and form. Kirtin is her protector and mentor, training her in these skills and knowing that one day these energies may grow to consume her unless she masters her own emotions and the power she derives from them.

In search of rumored other survivors like themselves, they set out amongst the worlds of the “civilized” Concord, finding that the presented superior and enlightened cultures they encounter conceal hypocrisies that assist even greater crimes. Entire civilizations built upon slavery and degradation are tolerated so long as they play the proper games of power and civility.

Led by the promise of knowledge regarding one of her kin, Rheba and Kirtin are brought to Loo, a planet ruled by a hereditary empire of slavers and decadents. There, both of them are consigned to slave pits beneath the gleaming cities and palaces of the surface. Amongst the forgotten and cast-off, Rheba and Kirtin find others like themselves, stolen or abandoned by their homeworlds and left to languish here, subject to labors and appetites and whims of the planet’s rulers.

But not everyone wants to remain a slave…

You can find Fire Dancer on Goodreads

About the Author:
Individually and with co-author/husband Evan Maxwell, Elizabeth Lowell has written seventy novels and one work of non-fiction. There are over 30 million copies of these books in print, as well as reprints in 30 foreign languages.

Writing as Ann Maxwell, she began her career in 1975 with a science fiction novel, CHANGE. Since then, seven of her nine science fiction novels have been recommended for the Science Fiction Writers of America Nebula Award; A DEAD GOD DANCING was nominated for what was then-called TABA (The American Book Award). After more than thirty years, these books are being brought back into print starting with the FIRE DANCER trilogy (FIRE DANCER, DANCER’S LUCK and DANCER’S ILLUSIONS) with TIMESHADOW RIDER following. The rest of her science fiction backlist will be published over the next two years.

For a chance to win, enter the rafflecopter below:
a Rafflecopter giveaway